business.com receives compensation from some of the companies listed on this page. Advertising Disclosure
Home
> Human Resources
> Hiring
Understanding Unemployment and the Labor Force
How Are Young People Getting By Without Work?
Why are Young Adults Staying Out of Work?
Employers May Need to Make Adjustments to Fill Openings
Our data

The top reason young adults aren’t working is that they want remote positions, but most can only afford to stay out of work for another six months.

Consumer demand has more than recovered since the dog days of lockdowns, and companies across the board are looking to bring on more talent. However, the labor market isn’t snapping back to what it was before the pandemic. With so many available jobs, why aren’t young adults in the early years of their careers heading back into work?

News media personalities have demonized unemployed individuals in recent months, saying that they are taking advantage of the welfare system and are incentivized to stay home rather than return to work. As jobs go unfilled in some industries, some employers might be tempted to settle for these simple explanations. But is this what is actually happening in the labor market, or are these convenient myths perpetuated by the media?

To find out, we went directly to the unemployed to understand their experiences. We conducted a study of 500 Generation Zers and millennials (people aged 18-41) who are currently unemployed but seeking new job opportunities.

Understanding Unemployment and the Labor Force

The labor force is the number of people in the United States looking for work or already working. The unemployment rate is the percentage of the labor force that is unemployed. It includes people who want a job but don’t have one.

We’ve all seen the help wanted signs, particularly in restaurants, hotels, and retail stores. Companies are looking for more hands. Why are companies struggling more to fill positions than they were in 2019?

There’s something big happening in the labor market; in many ways, something unprecedented. The causes are complex, but the bottom line is that fewer people are participating in the labor force, even with record jobs available. 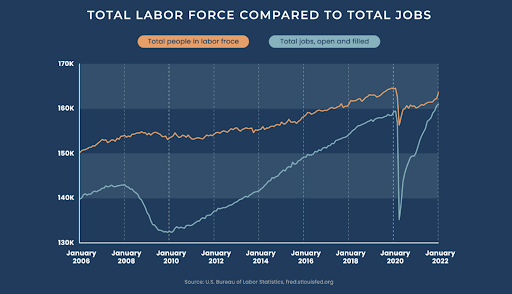 Usually, there are more people interested in a job than total available jobs, especially during lean times (see how the gap grows during recessions). For the first time, that gap is getting very, very small. There are almost more available jobs than people working or looking for work.

When you hear people say, “the labor market is tight,” this is what they’re talking about. While the population and number of available jobs have grown, the labor force has shrunk slightly since 2020. Retiring baby boomers are the main cause, but participation is down slightly even among the 20-24 age demographic as well.

The bottom line: many people have left the labor force. Fewer people are participating, which is why unemployment rates are officially so low (if you aren’t looking for a job, you don’t get counted in the “unemployment rate”).

So the fundamental question is: for those people who didn’t retire, what are they doing now? Who are the people who left the labor force, or still struggle to find work? Is this a case of laziness and government aid, or a structural change in the economy that workers and employers have to face together?

How Are Young People Getting By Without Work?

A common explanation, particularly from critics of government aid, is that vast spending packages from Uncle Sam are encouraging people to stay home and collect a check rather than go to work. It makes sense that a lot of people would take that deal!

The federal government indeed rolled out the most extensive economic relief package of all time in response to the pandemic. The U.S. spent roughly $4.5 trillion to cushion the pandemic’s financial fallout. Of course, the government doesn’t nearly double its budget without some knock-on effects on the economy. That money, including direct stimulus checks totaling $800 billion, had many downstream effects, as did dropping federal interest rates down to 0 percent.

Federal aid like unemployment benefits and Paycheck Protection Program (PPP) funds also impacted the employment market. Plenty of literature has been dedicated to that and the fraud that such huge, rapid-rollout aid programs attracted. However, that effect isn’t enough to explain the drop in the labor force, especially since September of 2021, when most of those benefits ran out.

According to our research, about 18 percent of unemployed young adults received government assistance. That’s a relatively large number, but it’s not enough to explain everything. It’s not even the primary way that unemployed young people support themselves.

The most common ways young people get by without a job are family contributions, savings, and odd jobs. A small but significant number of millennials are using credit cards to fill the gap between spending and income. It’s a concerning figure for a generation that has already struggled to hit financial milestones on pace with their parents, from buying a house to paying off student debt.

Most of the people in our study (nearly 60 percent) say they can only afford to be out of work for about six more months or until the end of 2022. That means we might see many of those help wanted signs getting pulled down in the next few months. Gen Zers, aged 18-25, may be the most likely candidates to fill entry-level jobs in food service, hospitality, and leisure.

Why are Young Adults Staying Out of Work?

Our research gave us some fascinating insights into why unemployed young people aren’t working as prices rise rapidly. Based on our research, the most significant factors driving young unemployment are a skills mismatch and people wanting a new relationship with their employer, especially regarding remote work.

While they bust the prevailing myth that they’re just getting a check from Uncle Sam, they support the narrative of the Big Quit, Great Resignation, or any other name for people opting out of the workforce.

Here’s a stand-out finding that you wouldn’t see in any other recession: the number one reason young people are unemployed is that they quit! Three-quarters of Gen Z and over half of unemployed millennials aren’t working because they quit their jobs, but they don’t want to stay out of work. Only about a quarter of unemployed Gen Zers got laid off or fired, compared to about 43 percent of millennials.

The biggest reasons young people aren’t working tend to fall under what economists call “good unemployment.” This is when you can afford to be picky about your position, so you wait until you find the best job. 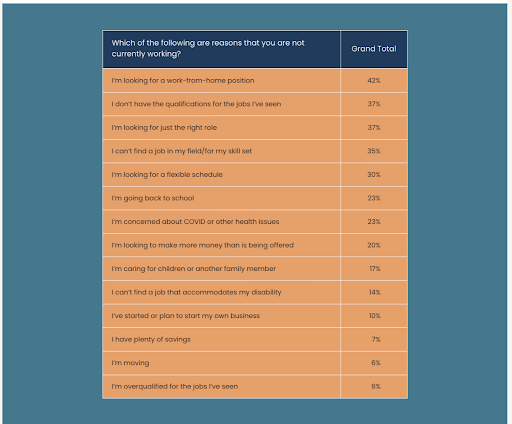 The main reason for unemployment among younger adults is not that they do not want to work. Primarily, they are looking for work-from-home positions. Forty-seven percent of millennials and 37 percent of Gen Zers are unemployed because they’re holding out for that remote job. This indicates a significant shift in what people expect from their relationship with work. That figure was exceptionally high for women, who may benefit from the childcare flexibility such work can provide.

One in five unemployed young women in our study hasn’t returned to work because they’re caring for children or other family members. After some women had the opportunity to work from home during the early days of the pandemic, mothers with young children are asserting their ability to do their job well while spending more time with their kids. Many are demanding that their workplace respect that balance.

Ultimately, it’s true that young people are generally unemployed by choice, in the sense that they could get a job quickly if they were willing to settle in some way, such as earning less, sacrificing remote work, or working outside of their field. The challenge is in matching company expectations with the reality of a new workforce. Employers may have to make some drastic changes in order to attract young talent to their teams.

Employers May Need to Make Adjustments to Fill Openings

The tension in the labor market is palpable, hitting companies with labor shortages and rising costs and consumers with higher prices, slower service, and bottlenecks for essential goods. Our research indicates that companies can help to resolve this shortage, at least partially, by offering workers the flexibility they had during the pandemic.

Over time, some of that tension should resolve as young people run out of savings or goodwill from their parents. They may have to be less selective in their job search. However, young people are sending a powerful message: we don’t want the working relationship of yesteryear. They’re looking for more out of their work lives, greater flexibility of time and space, and are willing to wait until they get it.

Business.com conducted an online study of 501 young adults ages 18-41 who were unemployed and looking for work. The median age of participants was 25. 50 percent were Gen Zers, who are aged 18-25, and 50 percent were millennials, aged 26-41 at the time of the study. 45 percent of respondents were women, 50 percent were men, and 6 percent were another gender. The survey questions were written in English.

business.com editorial staff
The purpose of our community is to connect small business owners with experienced industry experts who can address their questions, offer direction, and share best practices.