With the all-in-one form factor that provides a 21.5-inch display, the Apple iMac has one great advantage over all the other business computers in our review. It also comes installed with native video and photo-editing software, which makes it a great business desktop PC for graphic designers and video editors, though it lacks the dedicated graphics card for apps like AutoCAD. Since most of the business world uses a Windows operating system, there can be some compatibility issues. 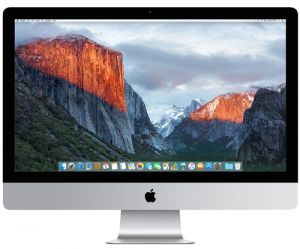 The Apple iMac is an excellent computer for graphic designers and video editors because of the intuitive operating system and quad-core processor, but it lacks expansion features to grow with your business.

In our business computer review, we emphasized business computers that could effectively perform multitasking and data-intensive tasks, which starts with the processor. To gauge the performance of the processor, we considered the PassMark score, an industry benchmark for CPUs. Then we evaluated the memory, storage and expansion potential.

The iMac is installed with the Intel Core i5-4570R processor, a fourth-generation quad-core processor with a base speed of 2.7GHz and a cache of 4MB. Based on these specifications alone, the processor is capable of handling multiple apps at once. However, the PassMark score for the processor is 6,485, which is just barely above the passable mark of 6,000 for performance. Much of this is due to it being an older processor than most of the CPUs in our review. This CPU was launched early in 2013 while most of the processors in our review were introduced at the end of 2015. You can upgrade the processor but at a significant cost.

While the iMac's all-in-one form factor has the advantage of having all of the components – the computer hardware and the high-definition display – in one machine, it doesn't have as much room to grow as other business desktop computers. Space is at a premium. It comes with 8GB of memory and 1TB of storage. You can upgrade the RAM to 16GB, but only before purchase. If you need to add more RAM, you have to take it into an Apple store for installation. You can't install additional internal hard drives or other components either, making it difficult for the computer to evolve and grow with your business.

Another flaw with the Apple iMac is the lack of support features. You only receive 24/7 support for 90 days. It has a one-year warranty, though you can upgrade to three years, which is the industry standard. Apple also lacks asset recovery and accidental damage coverage. These are vital services for ensuring that your important information isn't lost when a hard drive or other component fails. There isn't remote diagnostic or on-site service either, which would send a certified technician to your business to service your computer as needed. If you need your iMac serviced, you have to take it into an Apple store.

Apple's iMac is a great business computer for creative tasks like simple graphic design, video editing and audio recording because of the intuitive operating system. However, the quad-core processor isn't as powerful as the processors in other business computers within the same price range. Its compatibility issues with Windows, which is more widely used by businesses, can make it difficult to do business with others outside your company.

The Apple iMac is an excellent computer for graphic designers and video editors because of the intuitive operating system and quad-core processor, but it lacks expansion features to grow with your business.

business.com editorial staff
business.com Member
The purpose of our community is to connect small business owners with experienced industry experts who can address their questions, offer direction, and share best practices.