They say a picture is worth 1,000 words, but what if that isn't the full story? Learn the five biggest downfalls of data visualization.

Now more than ever, visuals are used to relay facts and figures in business, politics and socioeconomics. Data visualizations – such as graphs, charts and tables – are commonplace in presentations. When used correctly, they can be used to establish trust, tell a story and illustrate complex ideas.

However, visuals can also be manipulated to support the narrative the author wants to portray. Misleading and confusing images can skew the data and lead to misinformation guiding important decisions. Deceptive data visualizations lead to residual effects like miscommunication and a loss of trust.

FYI: Sharing misinformation can seriously hurt your brand’s reputation and cause you to lose your customers’ trust. Check out this article to learn tips for protecting your company’s reputation.

To understand just how easily visualizations can deceive, take a look at the following examples and how they can be corrected.

One of the most common manipulations used to control the narrative is to omit baselines or begin the y-axis of a graph at an arbitrary number instead of zero. This creates the impression that there is a significant difference between data points when the disparity is actually small.

To illustrate how a truncated graph can misrepresent the information at a cursory glance, consider the two graphs below. Both contain identical data, but the truncated graph appears to show a massive difference from A to E. 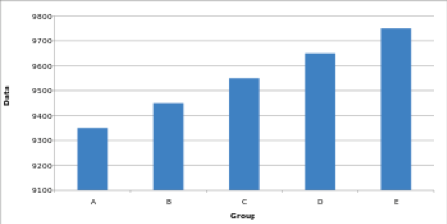 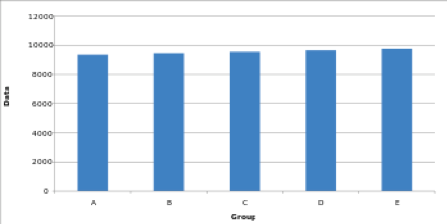 For a real-life perspective, CNN used a similar graph to show political party support for the controversial court decision surrounding the Terry Schiavo right-to-die case in 2005. Here, it appears as though almost three times as many Democrats supported the decision as Republicans and independents, when in reality, there’s only about a 14 percent difference. 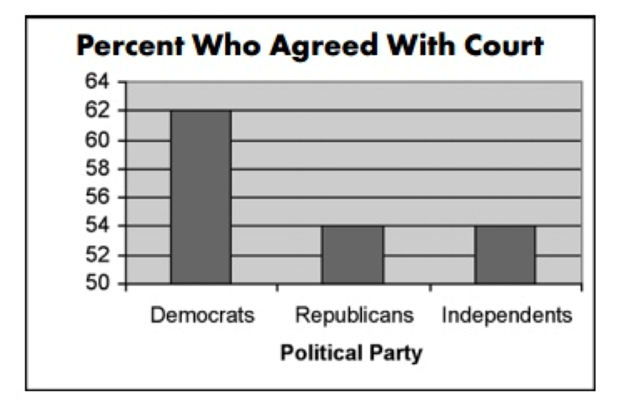 Setting the baseline to zero would have better represented the data. 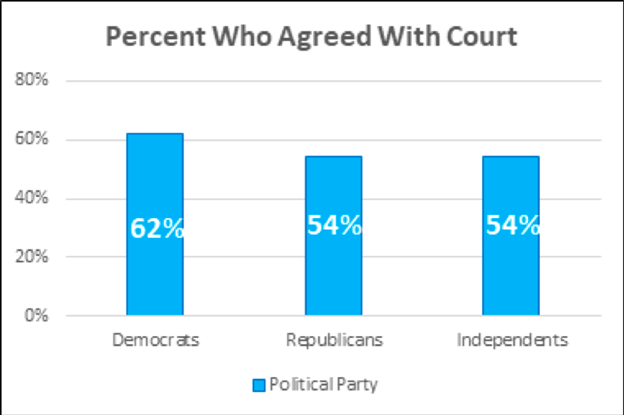 Additionally, clearly placed labels help further tell the complete story and decrease the amount of time it takes to process the information.

Line charts, often used to show rates of change over time, are notoriously simple to skew in favor of a chosen narrative. Unlike the bar graphs above, it’s not necessary to begin the baseline at zero to accurately portray the facts.

However, exaggerating the scale of a line graph can easily minimize or maximize the change shown. A higher y-axis value will cause a graph to reflect less volatility or growth. Conversely, a lower y-axis maximum will result in a steep line seemingly indicating increased volatility or growth. 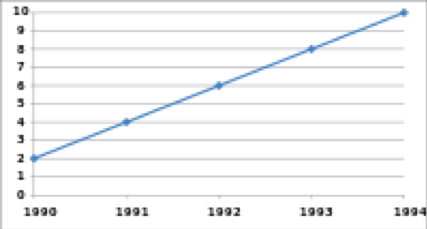 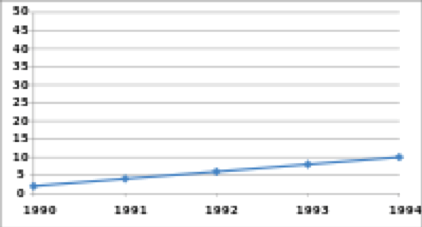 If you take into account that by nature, a line graph is far more subtle than a bar graph, narrowing in on the y-axis value may help provide a more precise visualization. That way, the message can be readily and more accurately understood in seconds.

Consider this representation of global warming over time. In the first image, the y-axis has been blown out, causing the graph to indicate almost no change over time. 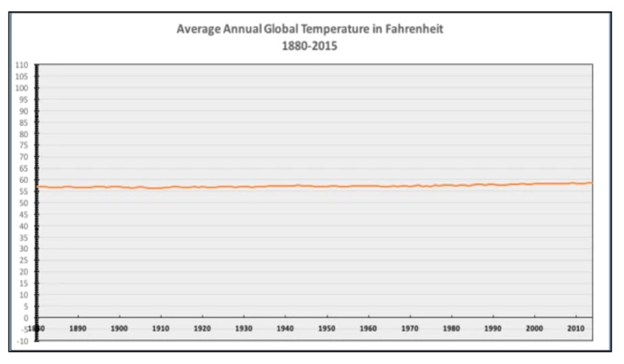 However, if you zoom in, minimizing the scale of the y-axis, you’ll see a different, more factual representation. 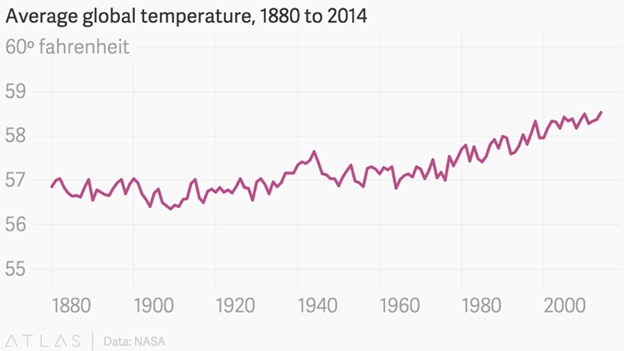 Extracting only a portion of data to align with a particular narrative, rather than letting the full story speak for itself can drastically alter perception. It’s like telling a white lie with the data.

This data visualization of General Electric Company’s performance on the stock market makes it appear as if they’re on an upward swing. 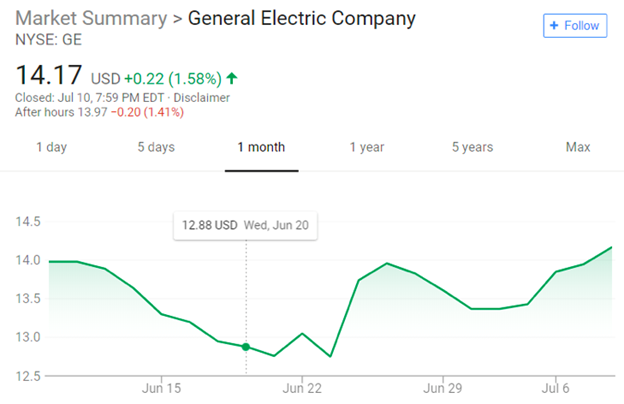 But if you were to pull back and look at the complete picture, that would tell a different story. 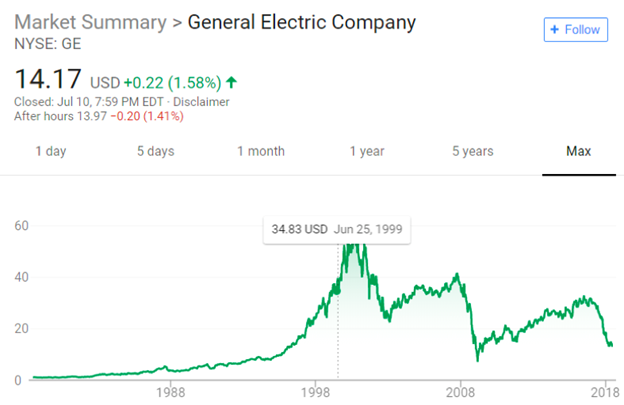 Without providing all the information it’s impossible to make an informed decision. But only providing a snippet of information results in misinformation leading to poor decision-making.

4. Going against the norm

It’s common knowledge that when talking about finances, green indicates profits and red denotes losses. Deviating from these long-held conventions can create confusion and possible misinterpretation of the facts when taken at a glance.

Here, the original visualization uses standard colors to illustrate profits and losses by state. With a quick look, you can plainly see there are more wins than losses. 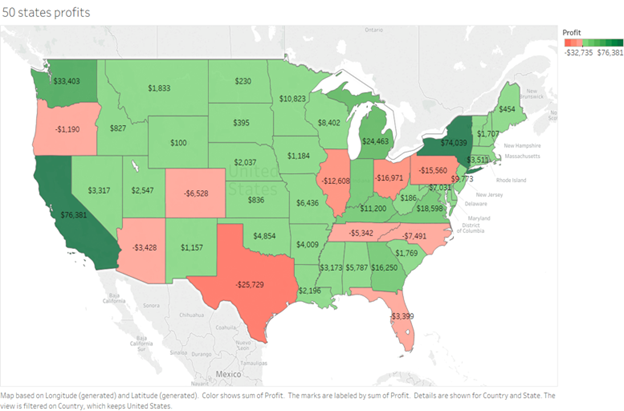 However, simply by switching green for red, it would appear that losses far exceeded profits across the majority of the country. 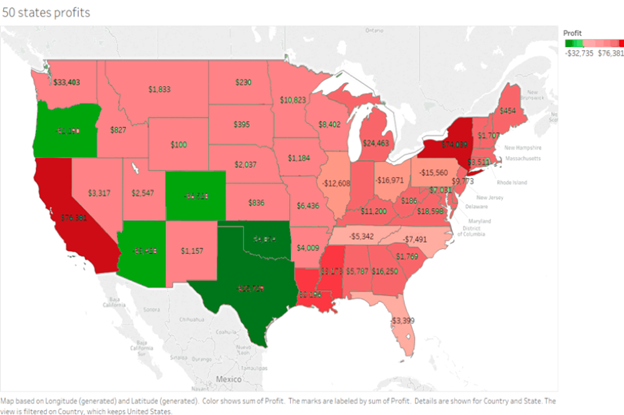 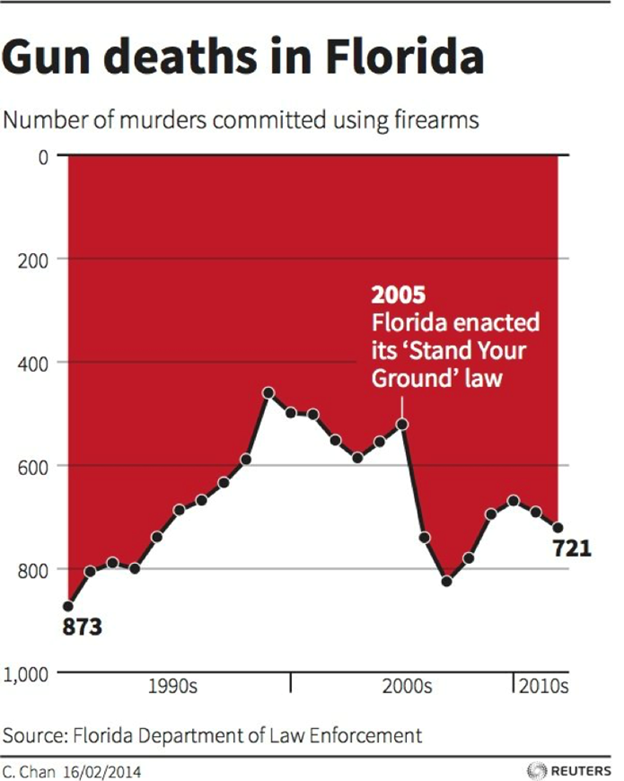 Since the purpose of including data visualizations is to quickly convey information, altering norms such as colors or order drastically alters perception as well. To avoid confusion, stick with convention.

With pie charts, the sum of each slice must add up to the whole. When the numbers don’t add up, you know there’s an issue – whether it be sloppy mathematics or an intentional misrepresentation. A pie chart should always add up to 100%, so check your math every time. 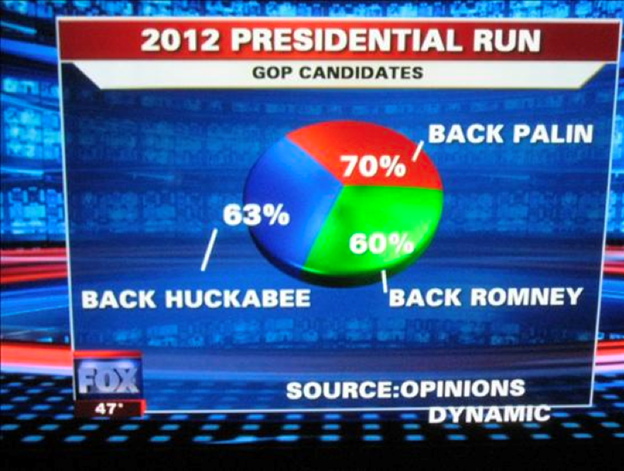 Furthermore, while 3D pie charts may look appealing, they do little to help convey accurate information and, more often than not, can cause a misinterpretation of the data.

As Edward Tufte notes in Chartjunk, designers often get caught up in the design element of 3D charts, prioritizing design and technology over the readability of the chart. Returning to the simplicity of a 2D pie chart may be in the best interest of both the reader and the data. 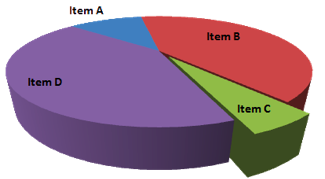 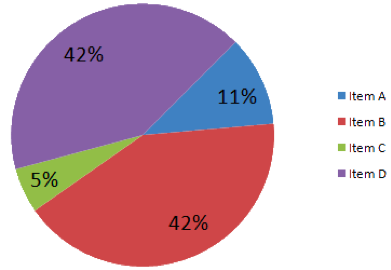 The following example further illustrates the distortion of angles that often occur in 3D pie charts.

Data visualizations may look easy to create, but a lot of effort goes into creating an effective one. Finding the right balance of elements and avoiding common mistakes are key. Here are four tips you can use to create better data visualizations:

How businesses can use data visualization

As businesses continue to collect more and more data, it can be hard to tell what is important and what isn’t. Data visualizations are a great way to cut through the noise and highlight the trends and patterns you want to focus on.

Tip: Data will be used to guide many of your business decisions, but there are times when you should go with your gut.

Thanks to technology, there is a wealth of data at our disposal. But if we falsely represent that data, we do a disservice to those that would benefit from its information.

Beware of making misleading visualizations and take care not to complicate the message with overly complex or inaccurate images. Although the numbers do not lie, the visualizations representing them may.

Image Credit: Africa Studio/Shutterstock
Sanket Shah
Sanket Shah is an instructor for the University of Illinois at Chicago Department of Biomedical and Health Information Sciences (BHIS) at the College of Applied Health Sciences. Professor Shah has created a course curriculum focusing on healthcare business intelligence, healthcare data, knowledge management and consumer informatics. Professor Shah brings considerable strategic management and technology innovation experience, and has a wide range of experiences in healthcare information technology on the provider, payer, government and vendor sides of the healthcare business. He has served in positions in management, system design, logical database architecture, product management, consulting and healthcare value measurement for the past 10 years in the healthcare industry.
Related Articles

What Is the Triple Bottom Line?

Which Government Loans Are Available to Entrepreneurs?

How to Hire for Your Business
More Related Articles
Related Reviews

The Best GPS Fleet Tracking Services of 2023
More Related Reviews
Technology
01.23.23
Oh No You Didn’t! 4 Tips for Preventing Employee...
Fraud can happen anywhere and be committed by anyone, including...
01.23.23
8 Tips to Become a Better Business Storyteller
Storytelling is a crucial marketing element for small businesses.
01.23.23
Choosing the Best Online Reputation Management...
Is your business's reputation failing? Here's how to choose the...
01.23.23
5 Best Augmented Reality Use Cases
Tech industry analysts and visionaries say augmented reality will...
01.23.23
How to Make Money in Retirement: A Guide to Turning...
Many retirees turn side interests into income. Learn how to make...