Nearly 30 percent prefer to bring their phones over their wallets when shopping. Is it time for your business to adapt to mobile payments?

Mobile payments are still a relatively new technology. Square was one of the earliest entrants (2009), followed closely by Google Wallet (2011) and PayPal (2012).

Yet with the introduction of Apple Pay in 2014, mobile payments really took off. If you don’t currently accept them, you’re missing out on a booming industry—an industry that continues to enjoy massive growth as time passes.

Mobile payment adoption is happening so quickly that according to a recent Pew Research survey, nearly 66 percent of participants believe their smartphones will replace traditional payment options like credit cards and cash by 2020.

It’s not difficult to understand why.

More than 80 percent of young adults currently have smartphones, as do 60 percent of their parents. When given a choice, nearly 30 percent of shoppers would choose their phones over their wallets when going out to shop.

What once began as a fringe technology is quickly becoming mainstream. Failure to integrate mobile payment options into your small business only makes it harder to convert customers eager to buy your products and services.

Worse still, your competitors will continue raking in huge profits as you stand on the sidelines. Prior to Apple Pay’s launch, more than 220,000 vendors had already signed up. When it went live, over 1 million shoppers registered in the first 72 hours alone.

This was just one mobile payment platform.

If you’re still on the fence about whether mobile payment solutions are right for you, here are some little-known facts that may tip the balance:

1.  Mobile Payments Can Save You Money

Accepting mobile payments is often cheaper than traditional credit card processing. With the right equipment (such as a wireless credit card terminal with the right software), it’s possible to avoid those 1-3 percent swipe fees.

Making the switch will not only bring you more sales, it will also help to reduce costs.

Processing fees aren’t entirely absent in the mobile world, but given how competitive the mobile payment market is becoming, it’s possible to shop around. Some providers don’t even require contracts.

2.  One Mobile Payment Solution to Rule Them All

There are many competing mobile payment options out there, and some customers are reluctant to try new platforms once they’ve found a solution that works.

Though as a vendor, you don’t have to offer every single mobile payment solution.

For starters, most platforms are converging as they get bought.

Arguably more important, near field communication (NFC) is quickly emerging as the gold standard of the mobile payment industry. According to Juniper Research, NFC-based sales could go from $60 billion (in 2012) to $110 billion (in 2017).

If you have an NFC-ready terminal, you can capture a large chunk of the mobile payment pie. Plus, since many newer EMV readers also accept NFC transactions, it’s possible to minimize your upgrade costs.

When you normally think of smartphone use, young adults and teenagers come to mind. Yet mobile payment adoption is higher among the 35 to 44 age bracket (29 percent) than among 25 to 34-year-olds (20 percent).

Contrary to popular belief, the Generation X crowd is arguably more profitable when it comes to using mobile payments than Millennials and Generation Z. 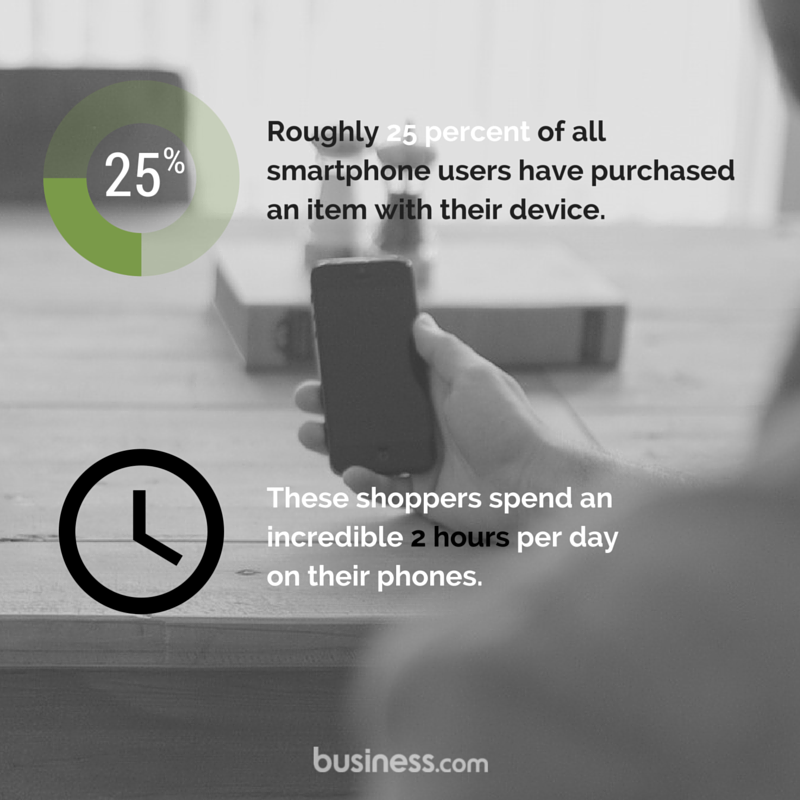 Roughly 25 percent of all smartphone users have purchased an item with their device. On average, these shoppers spend an incredible 2 hours per day on their phones.

To really make mobile payments work for you, you must have an online presence. More specifically, your site needs to be mobile-ready to tap into this huge pool of consumers who spend so much time in front of their tiny screens.

As an added benefit, having a mobile-friendly site is also great for SEO.

5.  The Days of Cash and Plastic Are Numbered

If none of the above convinces you that it’s time to switch, perhaps this will:

Cash is definitely on the way out.

Roughly 10 percent of Americans don’t carry paper money at all. According to the Federal Reserve, those who do hold cash usually have less than $20 in their wallets. By 2017, cash-based transactions will represent fewer than 25 percent of all in-store purchases.

Perhaps a bit more surprising is the steady decline of credit cards.

According to a Harris Poll, 63 percent of Americans believe mobile payments will replace plastic in the distant future, and 30 percent think the transition will happen in the next five years.

It’s unlikely that smartphones will ever completely replace traditional wallets (for the reasons listed here), but the writing is clearly on the wall. Mobile devices are quickly becoming the default when it comes to in-store shopping.

Making Mobile Payments Work for You

As a small-business owner, it’s easy to feel overwhelmed by the countless mobile payment options out there. However, making the transition is not nearly as painful as you might think. When done correctly, you can dramatically boost conversions, reduce costs and increase profits.

Kristen Gramigna
Kristen Gramigna is Chief Marketing Officer for BluePay, a provider of ecommerce payment processing. She brings more than 20 years of experience in the bankcard industry in direct sales, sales management, and marketing to the company and also serves on its Board of Directors.
Related Articles

5 Trending Digital Payment Methods: Is Your Business Ready For Them?

Applying for an SBA Loan vs. Funding From an Alternative Online Lender

Targeting Millennials? You Should Be Using Mobile Payments

Back to Black: How to Combat a Decline in Sales

The Best Remote PC Access Software of 2022
Whether you need to telecommute or troubleshoot...

The Best VPN Services of 2022
Here are the best virtual private network (VPN)...

The Best GPS Fleet Tracking Services of 2022
Here are the best GPS fleet tracking services to help...
More Related Reviews
Technology
Updated 03.29.22
Digital Disrupt: What We Can All Learn From the...
Adoption of new digital technologies has been a catalyst for...
Updated 04.01.22
8 Things Most Small Businesses Don’t Know About...
There are risks when your business handles sensitive payment data....
Updated 03.29.22
The Best Freelancer Websites for Finding Developers
Finding good help can be hard these days, especially in the...
Updated 03.29.22
Is Advertising on Instagram Worth It?
Advertising on Instagram could be a great way to attract new...
07.27.17
Buying a Retail POS System? Here’s How to Choose...
Here's what you should look for in a modern, technologically...